Look at these guys. Can you tell them apart? I have to admit - I can't, at least just by sight. 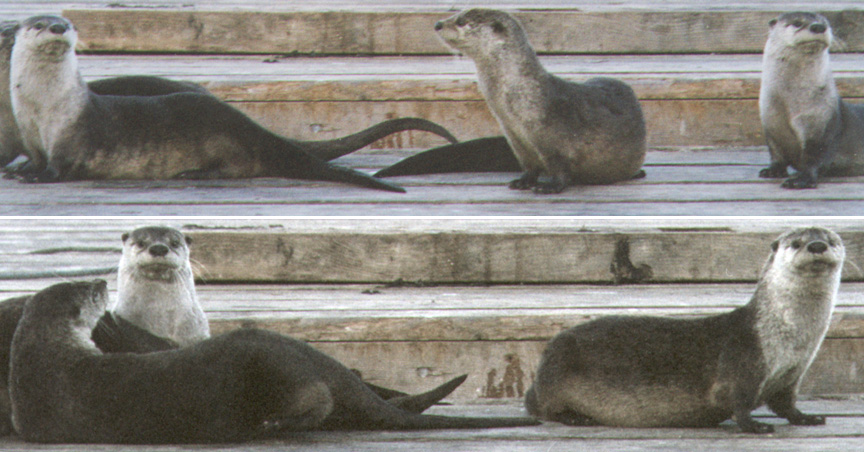 In 1998 and 1999, 3 young males that were not born here joined the local population. While I was very glad to have "new blood" here, these newcomers drove me to distraction. Although I had been identifying individual otters reliably for over 10 years by that point, all 3 of the strangers had minimal or no mustachial marks; local-born Complainer was plain-faced, too. As you can see in the photo, the new crew all looked pretty much like carbon copies of each other. The only member of the male Clan that I could identify by sight back then was old Ninety (top far left in background). That's just 1 out of 5. My identification skills had never been presented with such a challenge.

This kind of circumstance is where it's important to look at behavioral differences. Complainer was the easiest to segregate out from the other plain-faces because of his placid calmness, while the 3 newcomers were all very skittish. So, if I saw a calm, plain-faced male, I knew that had to be Complainer. (Complainer, today, is far easier to identify by sight, as he now has a very distinctive black mustache of his own.)

When the first 2 males arrived in 1998, I noticed that one was visibly smaller than the others. This small male was also what you'd call a "klutz." Many times he would stumble and get his little legs tangled, falling forward onto his chin. Or he'd try and climb up in a boat and fall off repeatedly. At first, he was the most nervous male, too, so that made him a standout. Just looking at his face, though, wasn't enough to identify "Little Beady Eyes" satisfactorily.

The other new male in 1998 had only 1 distinguishing characteristic other than skittishness, and that was his tendency to chirp like a pup when he got separated from the others. It was a distinctive chirp, too. But unless "Chirper" was chirping, or standing side by side with his putative brother, it was difficult to tell him apart.

The stranger, "Buck," arrived in 1999. He was probably the most skittish of all, and this definitely aided in his identification, but luckily, Buck had a faint but distinctive mustachial pattern, so if I could see his face from just the right angle, this mark made him the easiest to identify of all the newcomers. Buck had another physical characteristic that made him easier to identify than the others, but I'll cover that on the following page.

Still, looking at the photo above again, you can appreciate what I was up against. It was a genuine challenge to learn to tell these males apart, and it took 2 whole years, but eventually, I finally did manage to identify them as individuals most of the time.