Over the years, I've occasionally encountered skepticism about my ability to identify individual otters. I'll admit, identifying otters by sight is not easy, but if you know what to look for, it isn't particularly difficult, either. In this section, I'm going to review my basic techniques for recognizing individuals, but I'm going to do this by letting you do the identifying. Even if you've never seen a wild otter in person, all I'll have to do is show you some pictures and give you some basic information about the otters, and from there, you will be able to tell one individual from the other. Ready for some fun? Let's go!

We'll start out very simply - how to identify otters and their gender on the basis of appearance, social association and other behavioral patterns.

This photo shows a group of otters that is always together and is led by the larger individual in the center. This larger otter also provides all of the food to the smaller, dependent individuals. On the basis of this information, what kind of group do you think this is? That's easy - it's a family group. The larger individual, then, is the mother, and she is easily distinguished from the others by her size, and her behavior. 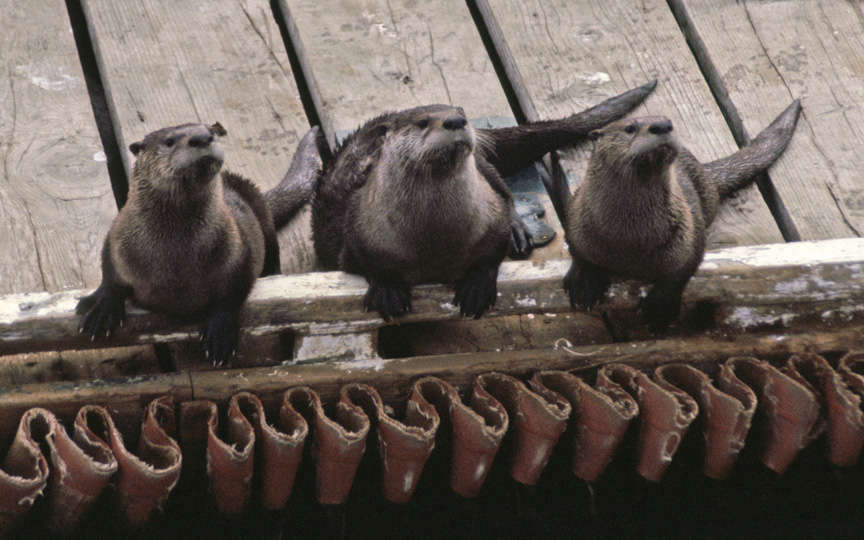 To really confirm the gender of the pup on the right, though, I would have to rely on the main way I determine sex, and that is by the orientation of the individual's urine stream. This is usually simple to do, because otters always urinate on land, and when one in a group urinates, the others usually respond by urinating, as well. Because of this, I can typically sex the members of a whole group in just a matter of seconds. If you saw the other pup pee, you could confirm that it is (as you probably suspected) a female.1

Here's a picture of another group of otters:

When you observe this group, you notice that you never see any pups in it. Also, when the group members urinate, you can see that the urine stream always exits them in a different place than it does on the mother otter, and there is a bulge under the base of each animal's tail which looks like it might be a scrotum. Weeks and months go by, and you never see an individual in this group whose urine stream or physical features indicate it's a female. Is this an all-male group? Scientists often say, "absence of evidence isn't evidence of absence," but that is not strictly true - it depends on your sample size. For a long time after my study started, I conservatively called this group "the adults," but after 4 years passed and I never confirmed the presence of a single adult female in this gang, I felt it was reasonable for me to conclude that this was a group comprised entirely of adult males.

1This picture is of First Mama and her litter of 1985. Because I only watched the otters during the summer in 1983, 1984 and 1985, I don't really know what happened to First Mama. All I knew was that when my sessions resumed in summer, 1986, there was a new, younger mother in the bay who could not have been First Mama's daughter, and this was the mother that later came to be known as Old Mama (here from 1986-1992).

On the next page, we'll take note of some other, more obvious facial characteristics which also facilitate individual identification.