"All otters look alike." I've heard critics say that many times. Is it true? Have a look at these 4 males from the summer of 1987, and judge for yourself: 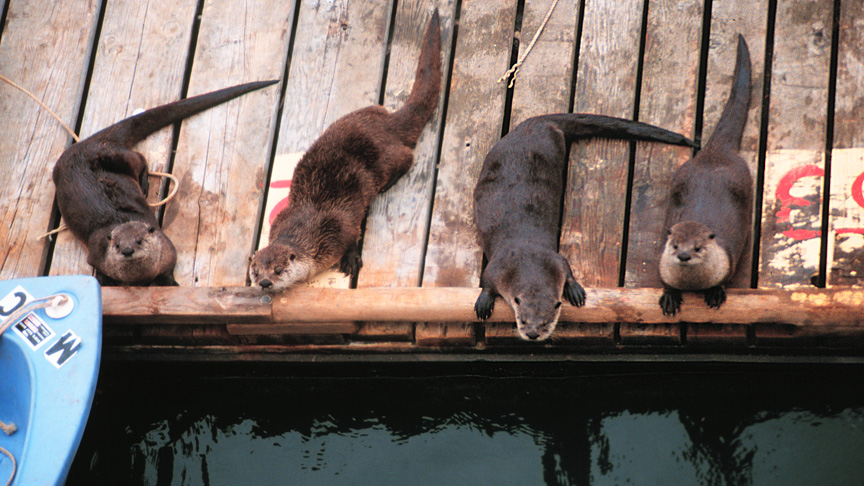 Here's another instance where I'm going to let you do the identifying.

Are all of these otters the same color? Are their bodies all the same size? These comparisons are easy to make. Are they all the same age? To figure that out may require a longer look, but you can answer that question for yourself, as well. Obviously, you can't tell their exact ages, but in relative terms, I have no trouble saying that the 2 individuals on the left are probably both older than the 2 on the right, and that the otter at far right is likely the youngest.

The reddish otter was not only a standout by virtue of the color of his fur, his guard hairs were also unusually long. Consequently, "Red" was very easy to tell from all the others.

The otter at far left was also easy to identify because of the grizzled fur on his head, and if you'll notice, compared to the others, there's noticeably less contrast in brightness between the fur on his face and the fur of his neck and chest, too. "Old Beady Eyes," as I called him, was also the smallest adult male in the population, and all these characteristics, in combination with his mustachial mark, made Beady another "one-glancer."

Third from the left is "Giant Black Otter." That description is pretty much self-explanatory. Giant Black was visibly larger than any of the others, and he was also a standout because when he walked, his posture and gait were so "loose" that it sometimes appeared as if he had no spine.

Young otter #4 was distinctive because he was just plain handsome. I never really came up with a name for him; I just called him "The Male," because he often paid visits to Old Mama and her family, and he was "the male" in the group. Because I never knew exactly where Old Mama came from, I didn't know about the pups she had before 1986, but on the basis of their friendly association, I speculated that The Male was Old Mama's son, probably from 1984 or 1985, before she became Matriarch here.

So, can we conclude that not all otters look alike? I wish that were true, but it's not. Most of the males who were here in the '80s and early '90s were distinctive-looking, but click here, and on the next page, you'll see the confusing situation I've been having to deal with in recent years...